Many will be upgrading to Exchange 2010 SP1 soon.  Many of you also have Blackberry Enterprise Server.  RIM has provided a pre-installation guide for Exchange 2010 here.  I wanted to touch on one of these pre-installation steps.  This is where we increase the maximum number of connections to the Address Book service.  The specific guide for this step is located here.  As you can see, you have to go into the following file “microsoft.exchange.addressbook.service.exe.config” and set MaxSessionsPerUser to 100000.

So the big question here is, what do we do?  What do we need to make sure of prior to upgrading to Exchange 2010 SP1 to ensure the BESAdmin account does not have issues connecting to the Address Book Service?  Well, the reason why there is no more MaxSessionsPerUser is that the throttling mechanism was moved to the Throttling Policies and is shared with the RPC Client Access Service which uses the RCA* parameters in the Throttling Policies.

One of the prerequisites steps in the BES Documentation (even for RTM)  is to create a Throttling Policy for the BES Admin Account.  You can see that step here.  Because the Address Book throttling has been moved to the Throttling Policy using the RCA* parameters instead of the “microsoft.exchange.addressbook.service.exe.config” we will want to take a look at the throttling policy we created for the BESAdmin account and make sure the RCA* parameters are set to $null.

Run the following command on Exchange 2010 to check the throttling policy:

We will see results as such: 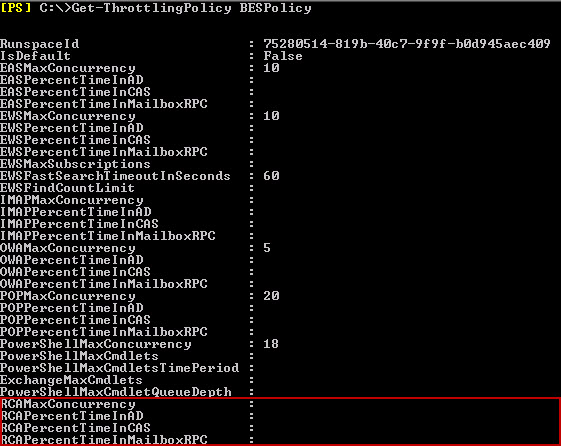 If you are doing a greenfield deployment of BES and need to create a new Throttling Policy with all of the options and then assign the BES Mailbox (assuming the mailbox is BESAdmin), run the following commands:

My hobbies include watching sports (Baseball, Football and Hockey) and participating in my 14 year old Stepson’s sports.