One Server 2008 Enterprise (Standard can be used) RTM x64  server that will be our File Share Witness (FSW) Server.  This box will not serve any other purpose in this lab other than FSW.

Storage Note: In a real-world environment, depending on the needs of the business and environment, it is best practice to install your database and logs on separate disks/spindles; both of which are separate from the spindles that the C:\ partition utilize. We will be installing Exchange 2010 RTM databases/logs on the same disks/spindles for simplicity sakes for this lab.  While Exchange 2010 databases move a lot of the IO for databases to sequential IO, there’s still quite a bit of Random IO occurring and is still recommended to place the database and logs on separate spindles.

Network Note: A single NIC DAG is supported.  It is still recommended to have at least one dedicated replication network.  If using only a single NIC, it is recommended for this network to be redundant as well as gigabit. 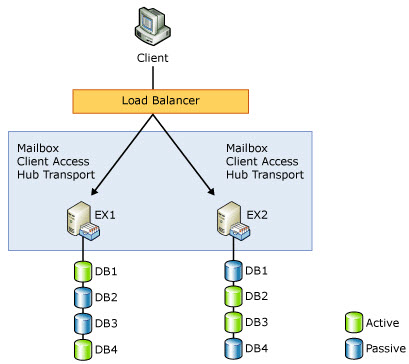 Some notes about this architecture:

First thing we will want to do is configure the IP Configuration of both the MAPI NIC and the Replication NIC.

Once in the Control Panel, Choose Change Adapter Settings.

First thing we will want to do is configure the IP Configuration of both the MAPI and Replication NIC.

Part of the assumptions earlier in this article as that you have a properly configured TCP/IP Network where all nodes are properly connected to the TCP/IP Network. Because of this, I will skip the Public TCP/IP Configuration and proceed to configuring the Private Heartbeat NIC.

Double-Click or Right-Click > Properties on the Replication NIC to begin configuration.

Go into the Advanced NIC configuration settings by clicking the Advanced button. From there, you will navigate to DNS tab and de-select “Register this connection’s addresses in DNS.”

Select the WINS tab and de-select “Enable LMHOSTS lookup” and configure the NetBIOS setting to “Disable NetBIOS over TCP/IP.”

Once you are done configuring the Advanced settings, press OK three times and you will be back at the Network Connections screen. From here, choose Advanced and select Advanced Settings…

You will be presented with the Binding Order for your current NICs. Ensure that the MAPI NIC is on top by selecting MAPI and pressing the green up arrow key on the right-hand side of the dialog.

We will be doing our prerequsite installations via PowerShell.  You can open PowerShell by going to Start > Run > PowerShell.

You will first have to import the module for ServerManager.  Afterwards, depending on the roles that are installed, different prerequisites are required.  Because we are going to be installing HUB/CAS/MBX, the command we would run is the following:

Note: The installation documentation does not have you include Failover-Clustering in the above command.  I add it anyways since we’ll be using it for the DAG.  I you don’t add it in the above command, you can just add it below when you enable the NetTcpPortSharing.  If you don’t add it below, when you add the first node to the DAG, Failover Clustering will be installed anyways.  I like to install it beforehand though.

Well folks, that is all for Part 1 of this article. For Part 2, I will go through the installation process of one our DAG nodes that will contain the Client Access Server, Hub Transport Server, as well as Mailbox Server roles.

My hobbies include watching sports (Baseball, Football and Hockey) and participating in my 14 year old Stepson’s sports.